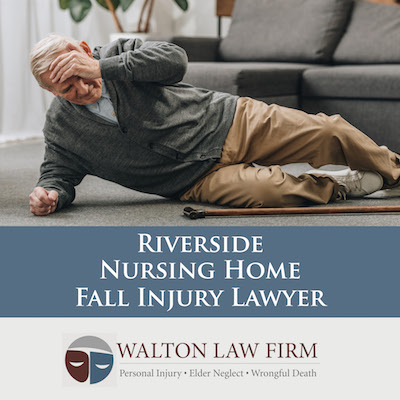 Riverside County seniors in acute care settings are often at some higher risk of falling than the average patient. Often, when these residents are taken into nursing homes or assisted living facilities initially, their risk of falling is noted and included in their overall care plan. Most nursing facilities use the “Morse Fall Scale” to determine a resident’s likelihood of falling, this scale is widely used in the medical community and is a fairly quick and accurate way of determining a resident’s risk of sustaining a fall injury. The scale uses a series of factors to determine risk, including the resident’s history of falling, mental status, and other factors that measure the resident’s overall mobility.

Once a resident is scored on the Morse Fall Scale, the home is required to prepare a care plan that follows along, to ensure that the patient’s risk of falling is reduced as much as possible. One such home in Riverside County did this exact thing. The home determined their patient’s fall risk using the Morse Fall Scale yet neglected to update and then follow a specified care plan after the fact, resulted in a fall injury that ultimately took the patient’s life. The Riverside home received a AA Citation by the California Department of Public Health as a result of this tragedy. The home was likely also sued or subject to legal action by an experienced Riverside nursing home fall injury attorney, had the family decided to pursue a case.

Hemet Valley Healthcare Center in Riverside County took in a patient in late 2016 and determined the patient’s fall risk on the Morse Fall Scale to be a 65, which put the resident at a “high risk” of falling (scoring about a 45 determines high risk). A care plan was established and followed for some time, but the patient was quickly put on a series of medications including Xanax and Lorazepam which both increased the patient’s risk of falling due to dizziness side effects of these medications. The doctor who prescribed the medication made a note to reassess the patient’s fall risk and act accordingly.

The patient’s fall risk then went up from a Morse Fall Scale rating of 65 to 95, yet there were no additional care plans put in place. The resident then sustained a fall that was serious but not life threatening, the facility assessed his fall risk again, yet again failed to note any care plan changes to accommodate the higher fall risk. Later that same month, the resident sustained a second fall, that led to a major head injury which ultimately took their life. The facilities failure to update the care plan after noting an increased fall risk was negligent and resulted in an otherwise preventable death of a patient. This negligence landed the Riverside facility a AA Citation by the California Department of Public Health and exposed the nursing home to legal liability from a Riverside nursing home fall injury attorney. Unfortunately, this type of occurrence is not uncommon, and attorneys throughout the US see this type of unnecessary nursing home or assisted living fall injury happen time and time again.