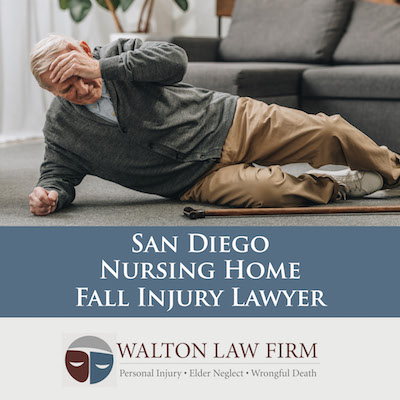 Fall Injuries are common among older populations for several reasons, yet the main principle is that as you age, medical conditions that accumulate, along with decreased strength and mobility, result in a less stable body which increases the risk of falling.

Many elderly folks in the US are residents of either a nursing home or an assisted living facility. The expectation of placing a loved one in a home is that they are being cared for and monitored throughout the day, with all their basic needs being met. Nursing homes and assisted living facilities have a responsibility to care for and be cognizant of each residents’ limitations; the resident’s risk of falling is included in that. Homes generally have the resident’s risk of falling noted during their intake, and a care plan that is catered to reducing the risk of a fall.

Most facilities use the Morse Fall Scale to document the resident’s risk, and the care plans that are implemented after are formed with a focus on how to reduce the risk of a fall occurring. Yet falls in nursing homes and assisted living facilities are still very common, even with these measures being taken; so, what happens after a resident sustains a fall injury? The facility and its staff and then responsible for seeking or providing the proper care for the resident after the fall, to ensure a proper and full recovery if possible. Failure to do so can lead to increased and unnecessary suffering on behalf of the resident.

A Skilled Nursing Facility in San Diego County unfortunately is a good example of this failure. The facility received an A Citation by the California Department of Public Health for failing to effectively address the resident’s injuries that were sustained after a fall. The delay in the patient’s treatment and mismanagement of her care resulted in a more serious injury that could have otherwise fully healed. This negligence also subjects the facility to legal action that may be brought against them by a San Diego nursing home fall injury attorney.

To breakdown the series of events, Vista Knoll Specialized Care Facility in San Diego County took in the patient in early 2016, and she sustained a fall at the facility later that year. The patient was sent for an X Ray that initially indicated a fracture along the neck of her humerus. The facility only provided the resident with over-the-counter pain medication and a sling. After 3 separate evaluations by orthopedic specialists and several other X Rays, the patient was diagnosed with a right shoulder fracture that had now become very displaced, this caused the resident to have no range of motion in her arm whatsoever. The specialists recommended that the patient undergo surgery to resolve this issue, yet the home did not follow up with or schedule a surgery until about 100 days after the patient’s injury. This delay in care along with other failures put the resident at a much higher risk of serious injury that could have even become lethal. This failure to provide care and neglect on behalf of the home is a situation that many lawyers specializing in neglect and abuse see in a wide range of injuries, yet not as often in a fall injury lawsuit. Yet this negligence in providing proper care after a fall can cause just as much damage as negligence in preventing the fall in the first place.

Many cases that come across a San Diego fall injury lawyer’s desk are those involving a nursing home or assisted living slip and fall, which is just one indication of how far reaching this issue is. According to the CDC, there are over 1.3 million elderly adults in the US living in nursing homes, with anywhere between 50-75% of these adults suffering from a nursing home fall every year. This prevalence of falls highlights just how important the prevention (and proper care of patients after a fall) can be in a nursing home setting.